„CATCH THE MOMENT – Flyfishing New Zealand“ is the product of a five-week trip across the Southern Island of New Zealand, undertaken by two German fly fishermen. In January and February 2008, the route lead the team into the various regions of this breathtaking island. They were accompanied by two camera people.

Equipped with two Landcruisers, tents and sleeping bags, supported by boats and helicopters, the team reached the most secluded places. These places became points of origin for long hikes along the wild streams, rivers and lakes.

Made from 75 hours of film material, recorded with four cameras, the two-hour movie documents the passion and the experiences of the two protagonists with impressive pictures. Pictures that tell about triumphs and failures in fly fishing of Brown and Rainbow trouts.

On this page you can find photos and movies in high resolution, the DVD cover and the Catch the Moment Flyfishing New Zealand-Logo for download. Haeger Stunt & Wireworks gives you permission to use these files with verification via Hyperlink or delivery of a verified copy. 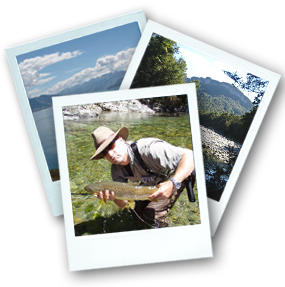